An early May sighting of the Golden-ringed promised a summer bounty of arguably our most stunning dragonfly but I didn’t encounter as many along Ober, Latchmore or Crockford this season.

My favourite day this season has to be my mid-Summer visit to Ashdown Forest for the magnificent Brilliant Emerald. Despite spending several hours glued to the same spot with little going on my patience was rewarded just as I was about to leave.

Such good fortune meant fate owed me a beating which killed my mojo for a short while, but thankfully a couple of trips to Kent kept the fires burning. The Kent Marshes gave us a good showing of the Scarce Emerald however the Southern Emerald failed to make an appearance this year.

Thankfully Marc Heath had found a thriving population of Willow Emerald on his doorstep which offered my best chance so far of witnessing this beautiful damsel in its element.

An added bonus to the day was my best chance of the season to capture the challenging Brown Hawker in-flight.

August means peak Hawker season with the Browns already in full swing, swiftly followed by the Moorland. A good year for the latter, especially locally where my first of the season was spotted at Ramsdown followed by several sightings at Cadnam Common.

These welcome appearances on the home patch didn’t prevent me from making my annual pilgrimage to The Mendips where they truly are a sight to behold.

We had to wait a little longer this season for the Southern Hawker to appear in abundance but when he did he certainly made an entrance and offered some excellent opportunities.

His delayed start meant he stayed around a little longer to keep those hardy Common Darters company with several sightings throughout October, the latter being seen as late as December, however I concentrated on his cousin, the vibrant and not so gregarious Ruddy. 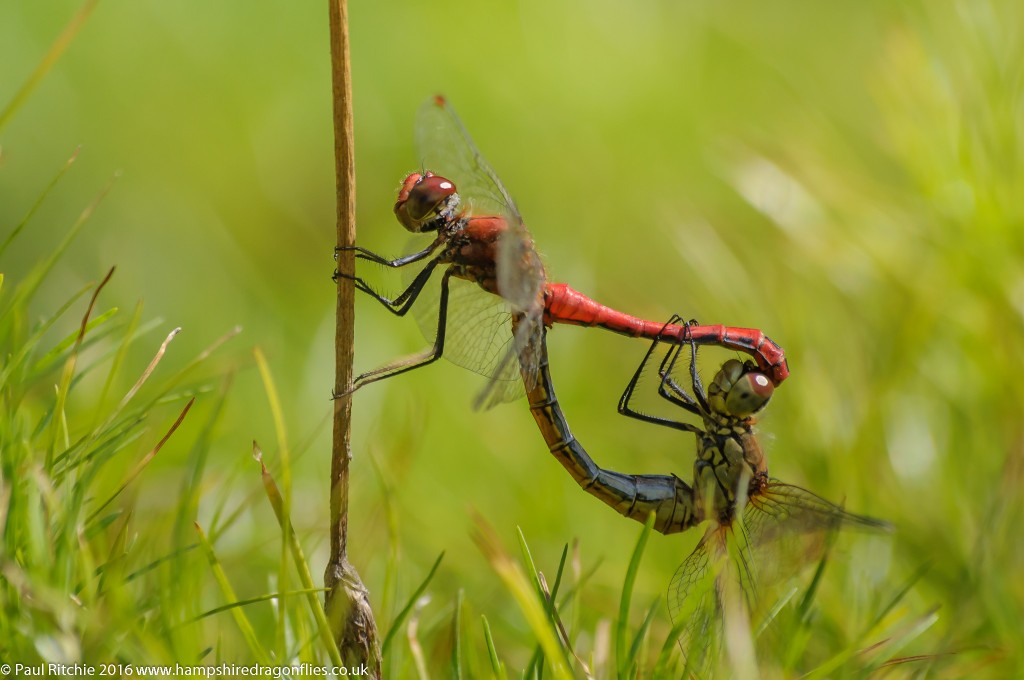 Where Hawkers are concerned the Migrant usually has a calmer demeanour in company than the Southern but this season they appeared far more aggressive than usual, with several occurrences of uncharacteristic bullying.

The profusion of Migrants is a bitter-sweet time of year, offering some peaceful and fulfilling moments before the close of season.

Despite their supposed change of character this year they could still make you smile.

There was a noticeable chill in the air towards season’s end and I chose to end mine traditionally with the Southern Hawker, always a pleasure to spend a moment with. (Click on image for animation)

Seeking out the rare and wonderful species not encountered locally and concentrating on places with greater rewards and peaceful atmospheres has ensured a satisfying season. New areas to explore and revisiting local areas neglected this year will keep me busy in the season to come.

To round out the year here’s a short video from Aaron Cook of our encounter with an obliging Emperor back in July.